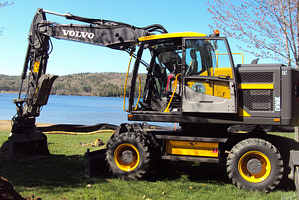 Well, I had a new sight when I arrived at my home lake. Gentlemen from the City of Franklin Public works were digging a well for the beach public restrooms.

I asked if it was alright if I went around them, and they said, “Of course!” They even helped me haul the Hobie Float Cat 75 past the excavator. Thanks, gentlemen!

Used with permission from NHF&G.

Here is a map showing the depths of Webster Lake. Griffin Beach (“Old Beach”) is at the intersection of Webster Avenue and Pine Colony Road, where the symbol for “shore bank” at the right and lower part of the lake.

The small point that you can see is where the waves are often rougher, but also the area where I found smallmouth bass last year.

Here’s a closeup look at that area.

Note calmness of the water when I arrived.

When I first arrived, the water was calm, but the bugs were thick! The Franklin workers were all wearing bug nets. I looked for mine, but it was not in my gear. Rookie mistake!

Because of the digging, I had moved to another section of the beach to launch original viagra 100mg. I tried desperately to get my flippers on where I launched, but eventually I needed to move back to my usual spot to use the raised bank to get my flippers on. One idea that struck me was to apply some velcro to both the snaps and my booties, so I can keep the snap in place while I clip in the second half. We’ll see if can make that work!

A bit of water turbulence.

As the day progressed, so did the wind increase. The wind, though described as “light breeze,” made the water choppy, so I didn’t try to travel too far!

I stuck to the two lures I used during my previous trip to Hawkins Pond:

I scoured the water:

But I found no willing bass. I was out level with the little island across from the point, and I headed for the rocky area past the point, where I’ve found smallies before.

I was heading into the wind, but I kept pulling. But the wind was strong enough to keep me from successfully staying in position. I have to work at my real job tonight, and plan to fish tomorrow, so I decided to call it morning, and head back to the beach.

By then the workers had left (though the loader remained).

But the bugs remained!

You can only see a couple on my face, but I assure you, they were swarming all around me! And they were hungry.

I was a meal for a few of them!

I hauled all my gear back to the pickup, loaded up, and left the beach.

There  were plenty of bugs still inside the cab with me, so I rolled down the windows and blew them all away!

This BassHole Smiling from behind a bug net!

I was blown away by the wind, and bugged by the bugs. But I got a bit of revenge when I blew the bugs right out of the truck cab!

Tomorrow I’ll try again, but at a new venue! And equipped with my bug net!

Here’s looking at YOU, kids!