Skunk Or Dink? You Decide! 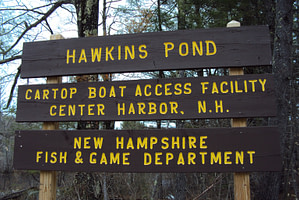 In my previous fishing blog log I wondered where I should go next. After careful analysis and your suggestions (THANKS FOR PLAYING!), I decided to try Hawkins Pond.

As stated earlier, Hawkins Pond is only 15% the size of my home water, Webster Lake. So I thought maybe this place would be warmer than 53 degrees, and the bass might be starting to get moving!

Still no bass! But I did catch a fish right at the very start. Within minutes of casting, I had “caught” the interest of a perch. Not a big perch, but obviously a scrapper looking to get bigger! After all, he was trying to eat a lure nearly as large as he was!

I later had a much larger perch grab onto the same lure, but was able to release it feet from my Hobie Float Tube. No stress, no mess!

And that was the end of the action!

In addition to the lipless crank bait that caught that monster perch in the photo above, I tried dragging the “pig & jig” across the bottom, hoping to locate some deeper water bass.

So, after more than an hour of trying with my 2 “standards,” I made some adjustments.

I rigged up a plastic worm, or, to be accurate, a plastic crawfish. Not completely different from the “Pig ‘n Jig,” but somewhat smaller and just a crawfish. Fished very similarly to the “Pig ‘n Jig,” I still hoped that by reducing the size, I might entice some lethargic fish into biting.

But it’s still something I’m glad I tried! And if you want to learn more about fishing plastic “worms” (in many shapes), be sure and check out the videos I posted here.

I wondered if the bass were out “deep.” I put that in quotes because Hawkins deepest point is only 33 feet. But I wanted to try and cover the entire water column, so I put on a lipped crankbait. These lures have a long lip on the front, and the longer the lip, the deeper they dive. You can get them right down to the bottom, and if that’s where the bass are, then you can catch some nice ones!

I managed to drag up some weeds in some places, but as far as catching a bass: That did not happen.

One of the items on my Christmas wish list was a terminator spinnerbait, and Brenda, My Internet bride, bought one for me!

I have never used these lures before, so I tied it on and cast it out. I tried a variety of retrieves, including fast, stop and go (letting the whole lure sink, then jerking it back into life), and everything in between.

I ran it deep and I ran it shallow, hoping to entice a bass to snap at it.

This time, that did not happen.

Was it a skunk? Maybe. After all, I didn’t catch any bass. But I like to think that dink perch saved me from a total skunk.

Was it a waste? Absolutely not! I was glad to get back into the water, and this was my first attempt at launching my Hobie at Hawkins. This is a fine place to fish for me, and is restricted to cartop type crafts, small boats, etc. So it’s generally peaceful.

Additionally, with my stiff left knee and general lack of flexibility, putting on my fins and then stepping into the opening of my Hobie is always a bit of a challenge. But this time I realized:

No idea if that’s some type of survival technique for the ducks, or if the additional brood were simply late for their appointment.

But THAT did happen!

What do you count as a positive experience when you aren’t catching fish?

How To Fishing: Why Is Fishing Fun?

How To Fishing: Why Is Fishing Fun?