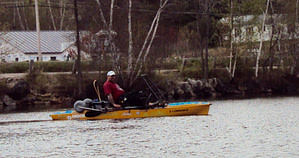 Chad in his Hobie Kayak

Let’s get right to the most exciting event of today’s fishing: meeting Chad in his Hobie Kayak!

I was on my way back to the boat landing area, when I noticed a young man cruising along in a kayak, pedaling to propel his craft forward.

He slowed down, and I asked him what he had, and it was a Hobie MirageDrive Kayak. 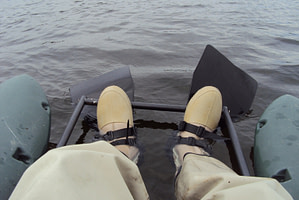 This was a 14-foot version, but I forgot to ask Chad what model it was. Perhaps a Hobie Pro Angler? If I see Chad again, I’ll certainly ask him.

You can’t make out the bar in front of Chad that helps give the angler stability while standing up. So I asked Chad if he can stand in the kayak. And up he went! Stood right up without any difficulty.

I asked Chad how he liked the Hobie Kayak, and he assured me he loved it. He hauled the MirageDrive right up out of it’s slot to show me the drive. He said he could get up to 7 mph just pumping his feet, and the effort was “easier than riding a bike.”

Chad told me he’s taken that Hobie out onto the ocean fishing for stripers and tuna. Of course I’ve seen photos of fisherman doing the same, but this was the first live witness to the Hobie I’ve met.

Chad reported that the only downside of the kayak is it has no reverse. So, you must go forward!

AND I know he caught some trout, because:

Thanks for the information, Chad! I hope to see you out on the waters again.

OK, now back to the basic background information.

This was a 2-day fishing trip, though I drove from my home on both days. Highland Lake is just a 10 minute drive from my home, and basically is just up the road from Webster Lake, which I’ve written about many times so far (and will go back to again!)

As I stated in an earlier post, Highland Lake is about 1/3 the size of Webster Lake. But it isn’t getting warm any quicker!

Over the 2 days, I covered the area from the boat launch area, to the point at the bottom of the image.

To do that, I had to “boogie” on day 2, and so I even rowed correctly. Not sure if that is “backwards” or “forwards,” but it means I couldn’t see where I was going. But the extra power helped get me there in about 15 minutes!

I found the place!

I finally figured out (thanks to my son-in-law Nick’s description and my iPhone’s directions) where to launch!

By now you’ve probably figured out:

No bass. But I did see some interesting sights (including Chad!).

Polliwog before “scampering” away.

Here’s a polliwog that I saw right at the boat launch. There were a bunch more, which I certainly noticed when I got into the water and they all scrambled away! So I could have tried my Wiggle Wog, but instead I tried a few other lures (listed below).

I didn’t catch any fish, but I’m sure the loon I saw certainly did!

I read that looking for birds is one way to find bait fish, and where there are bait fish, there could be bass!

But I didn’t really dare casting out to where the loon was fishing. I believe I also read about someone once catching a bird on his bait, and I certainly didn’t want to have to try to disentangle my lure from an angry loon!

Well, technically it’s a weather vane. But it was pretty cool, so I thought I’d share it.

So, middle of the water, bottom, and top and up and down!

But I couldn’t locate any bass.

Caught me a stick!

Nice stick? You should have seen the one that got away!

I did manage to catch this stick! As you may be able to see, the Red Eye Shad did the honors.

I had caught a rope earlier, which was wrapped around a stick, which was caught on a rock ledge, but at that point I didn’t think to take a photo, since I was still thinking I might catch a fish!

As I was leaving, so were a couple of other anglers (I won’t call them BassHoles, since they were fishing for trout). They were also skunked (one told me the first time in a very long time). They blamed it on the date: Friday the 13th. And maybe there is something to that?

I do wish I had more mobility. My BassHole powered craft is limited by the fact I’m no longer in my 20’s! Those days are long gone!

But at least my efforts will pay off, if not in fish caught, at least in fitness gained?

Hey, we’d all love to hear YOUR fishing adventures, even if you didn’t even catch a stick!