Fish On! Not Bass, But Fish!

I returned to Hawkins Pond in Center Harbor, NH. 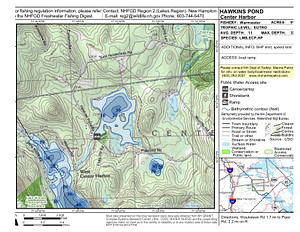 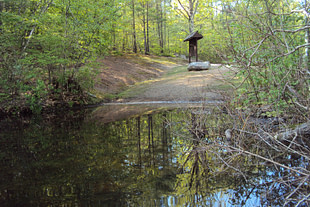 Where every Hawkins Pond fishing adventures begins: The boat put in!

My notion that the water may be warming up at Hawkins (I thought my FishHunter recorded 85 degrees!; but later I realized that was the amount of battery charge remaining!) seemed to come true. I saw evidence of spawning in the form of bass beds.

My first pickerel at Hawkins Pond this year!

My My friend, and fellow blogger, James, wrote a post in his blog, Spiral Revolutions, about the definition of “Success.”

Sometimes, you can get exactly what you want, and yet don’t feel that you have experienced success. The completion fails to satisfy.

Other times, you can have something you DIDN’T expect, plan for, want, or desire, and THAT turns out to satisfy you and make you happy!

One lesson: don’t let unexpected great experiences fail to satisfy you simply because they don’t fit a restricted definition of “success.”

Was the trip a success?

I mention James’ post, because I had to ask myself, after fishing for bass all day, and catching no bass, WHILE catching 10 fish, was this a success?

Obviously, not if I restrict my definition to only catching bass. But I did catch fish, and on the lures I chose.

I caught 7 pickerel, 2 perch, and 1 bluegill (or sunfish, or pumpkinseed, or panfish, or, as my wife calls them, kivvies).

And another pickerel! But I won’t show all 7!

Now, if I had caught 10 bass during that trip, I would certainly have been ecstatic! So why would these fish not count?

OK, I must confess, I’m no purist when it comes to fishing.

I was a fly fisherman who targeted trout, but now I fish for bass. Frankly, I LOVE the bass’s fight and pull! Trout are fun, sure, but the bass is a real treat to me.

The first few hours, I had no action at all. I cast to the shore, and fan cast to deeper water, and never had so much as a pull.

Then, I reached one of my favorite fishing areas on Hawkins Pond. Later in the season, there will be many nice bass hiding under the weeds, waiting for unsuspecting prey before they pounce on them and find my lure instead!

Here’s the spinnerbait that did the honors!

And bang! I caught a pickerel! And that fish caused me to keep fishing.

A Peck of Pickerel!

I had a blast catching those pickerel! I always handle fish as little as possible, for their own safety, but with pickerel I’m especially careful.

Pickerel have sharp teeth, while I have highly sliceable fingers. Thanks to one of the Christmas gifts my wife bought for me, Boone Easy Hook Remover (long pliers), I am able to unhook and release the pickerel without even touching the fish!

Pickerel put up a good fight

I enjoyed catching those pickerel. I could sometimes see them charge into my sight and grab that spinnerbait. And then they tried to yank it right back out of my hands and into their lair.

And I do love spinnerbaits!

Well, here we really need to consider our definition of success.

Because while was back in those weeds, I saw some nice sized bluegill swimming around. Now, as I said earlier, I ain’t no purist (sure, I’m a BassHole, but that’s not all I am!) when it comes to fish.

In fact, in previous years, I went out specifically to fish for bluegill, using my 3-weight fly line and small popping flies or nymphs viagra europa.

So, when I saw those bluegill, I decided to try and catch some. I got a tiny little spinner out of my tackle box (which I only knew was there because I saw them when I was de-barbing my other lures), tied it on, and threw it out. Of course you’re not supposed to use a 7-foot medium rod with 1o pound line, but, do I need to say it again? I’m no purist!

And a bluegill promptly obliged me by biting the lure!

So, surely this WAS a success!

These geese were just feet from me!

A few trips ago, I wrote about seeing a mommy duck and her ducklings. On this trip, I saw 2 Canadian geese with 3 goslings!

They obviously did not see me as a threat, and calmly swam in front of me, then climbed out onto the shore.

I even got a video of the geese climbing out, but haven’t been able to get it cleaned up to add it yet, so stay tuned for that!

After they climbed on shore, I moved away since I didn’t want to disturb them. After all, this lake is certainly more theirs than it is mine!

So, it was definitely a success in MY book! I caught fish, I had fun, I enjoyed being out there and watching nature up close.

I did have some clear failures, though!

Quick research showed it cold be one of 3 issues:

I don’t believe I broke the finger, as I didn’t really do anything and it’s not swollen or painful.

It could be either of the other 2, but I’m hoping it turns out to be “jammed.” A trigger finger doesn’t ever recover, while a jammed one should get better all by itself.

At least I can still tie knots, cast, and type!

But, all in all, a day well spent and fish happily caught.

Let me know YOUR definition of success, fishing or otherwise, and leave a comment!